Taken from the History of Kansas, published in 1883 by A.T. Andress

This enterprising city, bearing the name of one of the most prominent journalists in the eastern States, is located on the south bank of the Little Arkansas River, ten miles west of Newton, the county seat.

In the spring of 1872, a settlement was made in the vicinity of what is now known as Halstead, by Samuel Leeper, James Popkins, Frank Brown, David Patrick and John Corgan, who located earlier.

In the summer of the same year the first attempt was made towards laying out a township by Capt. Sebastian, a large stockholder in the A.T. & S.F. Railroad, who laid out a township 1 ½ miles east of the present location.

In the fall of 1872 the Halstead Township Company was organized with H.D. Allbright as president. A tract of 480 acres was purchased and in the spring of 1873 the present town site was laid out.

The foundation of the first building was erected in the town site was laid in March, 1873, by G.W. Sweesy. This building, when completed, was a two story frame building 32 x 42 feet and was used as a hotel, known as the Sweesy House. It was located at the corner of 1st and Main Streets.

The next building in Halstead was moved to Halstead from Sedgwick by O.Y. Hart and used as a store building. Fred Eckert moved his drug store from Sedgwick and opened the first stock of drugs. He was followed by Hall & Wiley and Fred Brewer, who operated a general store. The location of these stores is not known.

In the spring o 1874, John Lehman, Jacob Diedieter, B. Warkentin, Peter Wiebe, M.S. Ingalls and others moved in and established businesses. From this time on the town had a steady growth.

The first religious services were held in the Sweesy House in the spring of 1873, by Rev. John Harris, a Methodist.

The first disastrous fire occurred March 8, 1879, in which three buildings occupied by the Lehman brothers, M.S. Ingalls and the “Zurheimath” printing office were destroyed, at a loss of $7,000.00.

A school house 26 x 36 was built in the winter of 1873-74. Mrs. Laura Bell Walker was the first teacher. This building was used until 1882, when a brick building was built at the cost of $6,000, located on the block where the new Kansas Learning Center for Health is currently located.

The Halstead Post Office was established in the spring of 1873 and G.W. Sweesy was appointed Postmaster.

On March 12, 1877, Halstead was incorporated as a Third Class City with H.H. Adams as Mayor, O.Y. Hart, J.E. Ruth, M.S. Ingalls, C.S. Brown and John Lehman as Councilmen and George E. Terry as City Clerk. The Halstead Record published by W.F. Walker was the official paper. At this time Halstead had a population of 400 with one flour mill, two elevators, four dry goods stores, two drug stores, three hardware stores, two blacksmith shops, two wagon repair shops, one tailor shop, two butcher shops, two hotels, three newspapers and no barber shops. Most citizens were Mennonites and had no need for a barber shop. A license to open a dram shop was issued on April 17, 1887, the owner is not known. There were also six grocery stores.

Plans for the city building were submitted and accepted. The contract was let in February to O.Y. Hart. The price was $220.00. And the building was finished in March of 1879.

In March of 1881, an ordinance was passed to prevent minors from loafing around the depot or depot grounds and climbing on or pushing cars upon the switch tracks.

Another ordinance was passed in September prohibiting the keeping open on Sundays all places of business except hotel and restaurants for regular meals and prohibiting the sales of all kinds of merchandise and wares, except drugs and medicine and provisions.

In 1890, Halstead had two newspapers: The Halstead Independent, edited by J.F. White and the Halstead Tribune, edited by J.C. Gaiser. Also, in the city was granted permission from the Santa Fe Railroad to use water from their tank in case of fire. A stockyard was also built adjacent to the railroad tracks.

On May 10, 1893, the city had its first clean-up day, gathering garbage and tin cans from the alleys. And Halstead’s first night watchman was appointed by J.F. Jewett on November 1895. That year the city evaluation was $113,945.00.

With Dr. E.M. Hoover as Mayor in 1896, it was decided to prepare Riverside Park to accomadate public gatherings and picnics by building a commodious stand for speakers, provide seats, water and walks. A committee of five was appointed to solicit funds to build a dam across the river by the park, and in 1887 the council decided to build a foot bridge across the river above the Main Street wagon bridge.

The City Council passed an ordinance to have all business places close by 11:00 p.m. in 1889, and in 1890 they purchased a street sprinkler.

With W.C. Hinkle as Mayor an ordinance was passed to call a special election to be held on September 23, 1902, to decide on building a new city hall and issue bonds not to exceed $8,000.00.

On March 7, 1907, J.C. Girk purchased the frame building in which the Palace Drug store was located and tore out that building and erected an up-to-date building.

A few citizens had purchased automobiles by 1908 and Mayor J.D. Lange appointed a committee to draw up an ordinance regulating the speed of them on the streets of Halstead. The next year it was decided to organize a fire department and pay a salary for services rendered.

Under the Mayorship of J.S. Eyman, J.A. Hopkins representing the Arkansas Valley Interurban Railroad presented an ordinance for a franchise for said railroad and it was granted. That same year a franchise was granted to the Kansas Gas and Electric company to supply the city with electricity.

On May 6, 1913, 55 citizens signed a petition for the installation of a sewer system which was granted, and A.C. Moore, City Engineer, was to oversee the project.

The old Frisco House Hotel was ordered torn down in 1917. The new A.V.I. Depot was built in 1922 and the tracks were relaid in the center of the street so pavement could be laid on each side.

The property of Peter Wiebe, just south of the Little Arkansas River and west of the mill, was purchased in 1924 for a price of $2,500. The house was moved and the ground added to the Riverside Park.

In 1926 a franchise was granted to the Western Distributing Co. to furnish gas to the city. That same year J.L. “Mike” Huffman was appointed City Clerk.

Business transactions from 1930 until 1938 were: The City put in its own gas system using W.P.A. labor; an electric clock was installed in the tower of the fire siren and the siren was to be sounded at 12:00 noon every day and a new fire truck was purchased. 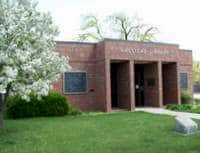